After the Great War and subsequent Cataclysm, nations lay decimated across the globe. Borders fell, economies were ruined, and lawlessness prevailed. Amid chaos and uncertainty, the Jaeger Consortium rose up as the beacons of chivalry, truth, and justice. They were the international investigators, police, judges, and executioners with the sole purpose of hunting those who sought to oppress the weak. 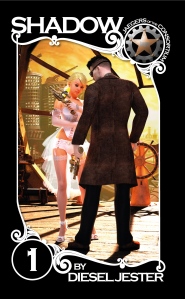 Jaegers of the Consortium 01: Shadow

Charity Carmichael, Countess of the Theocracy of Dixie and heiress to the Carmichael fortune, returns home from University to find she is to be married to Baron Edward Spence III at summer’s end. Charity does not love, or even like, Eddie. She longs for real love and adventure, but she must do what her parents and society expects of her. But while dolefully planning her wedding, she is surprised to learn that her bank accounts have been drained. Charity requests permission to travel to the tropical island of Elysium to visit her best friend, Ayla, while the investigation into her lost finances takes place. What was to be a simple last vacation as a single woman, quickly becomes the type of adventure in lust and love that she’s yearned for. Ayla introduces Charity to her dangerously handsome and flirtatious accountant, Lucas Wolverton.

Shadow, the first book in the Jaegers Consortium series, is a story of romance, lust, crime, and mystery that’s set in a world of steam-powered transportation and elaborate décor. Join Charity as she navigates her way through the danger and conflict. 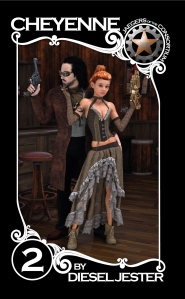 Jaegers of the Consortium 02: Cheyenne

Ayla Greenstar leads a double life by day she is a respectable businesswoman working for her family business, Greenstar Industries. By night, she is the notorious pirate known as Cheyenne. Thus far she has managed to keep her two lives separate from her longtime boyfriend Jake Walker, who is a Jaeger of the Consortium.

After a night of passion, Jake uncovers clues that connects Ayla to her alter-ego – his nemesis – and he launches an investigation, despite being torn between his love for her and his duty to the Consortium. Not one for sitting still, Ayla flees New Eden in search of her next target, a visiting dignitary with some very shady dealings.

As Ayla leads Jake in a chase across the Island Confederacy of Elysium, Jake begins to learn that there is more to his girlfriend than meets the eye. In her own warped way, Ayla introduces him to her lifestyle and shows him that things are not as simple as he makes them out to be.

When the investigation deepens, Jake is forced to team up with Ayla. This causes him to war with his inner self. Will he do what is demanded by the Consortium and bring her in? Or will he listen to his heart and follow her where she goes?

Will Ayla be able to live with a Jaeger for the rest of her life, or will she do the impossible and convince him to leave the Consortium for good?

Cheyenne, the second book of the Jaegers of the Consortium series, is a story of romance, lust, mystery, and intrigue that’s set in a world of steam-powered transportation and elaborate décor. Join Ayla and Jake as they navigate their way through the danger, conflict, and politics of a modern-day steam driven society. 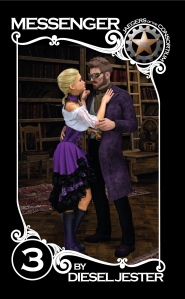 Jaegers of the Consortium 03: Messenger

The fall of the prestigious House of Spence has shaken the Theocracy of Dixie to its very core with Baroness Lucilla “Lucy” Spence at the center of it all. Having been arrested by the Consortium in connection with her older brother’s crimes, Lucy strikes a deal in which she gives testimony in order to protect the rest of her family. Testimony comes at a price as in doing so as she unwittingly breaks Theocracy law to do so. Now she is disowned, out on her own, and facing a very vengeful Theocratic system of justice by herself.

Jaeger Gabriel McKibben, The Messenger, who was once betrothed to the Lady Spence, has been called to act as her advocate. Having once been burned by the Spences before, he takes a cautious outlook on the case at first but soon unleashes the full fury of his legal expertise when he realizes that the woman he once loved is just a victim of circumstance. He has taken on tough cases before but wonders if even he can beat the system this time.

In his effort to save Lucy, Gabriel’s investigation takes him all over the Theocracy as layers upon layers of corruption and deceit are uncovered. While Lucy’s freedom from Theocratic law hangs in the balance, Gabriel must call in the full weight of the Jaeger Corps to get to the truth while facing skeletons in the closet that he thought were long buried. It’s a whirlwind adventure that takes them both to the far borders of the Theocracy and even out into the dreaded Wastelands themselves.

Messenger, the third book in the Jaegers of the Consortium series, is a story of romance, lust, mystery, and intrigue that’s set in a world of steam-powered transportation and elaborate décor. Join Lucy and Gabriel as they navigate their way through the danger, conflict, and politics of a modern-day steam driven society.

In the far future of humanity, two major powers have emerged; The Terran Confederation and the New Roman Republic.  After fighting a long, bitter war, the Confederation emerged victorious by pulling off the unthinkable; engineering the destruction of an entire planet.

Now with humanity ceasing hostilities against themselves, and the other races of the galaxy breathing a collective sigh of relief, tourism, trade, and commerce has resumed.

But one has to watch their step wherever they go or else they might fall… hard. 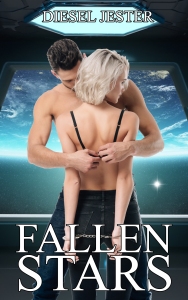 The man that the Republic fears the most is about to tear it apart to free the love of his life.

Kidnapped on their honeymoon by the New Roman Republic, Sam and Sara must now fight and survive to be reunited.

What Sam’s kidnappers don’t know is that he’d just spend the last 12 years fighting them and he’s not about to let a mere peace treaty get in the way of getting his woman back.

Sara has been sold as a pleasure slave but the implants put inside of her are now sapping her will to resist. Can she hold on long enough for Sam to get to her, or will she succumb to them and fall for her Master? Will Sam reach Sara in time and how many bodies will he break to get to her? What’s more, when he does get to her, will she still want him?

Find out what happens when Sam and Sara are torn from each other’s arms by cruel slavers in this new sci-fi erotica. 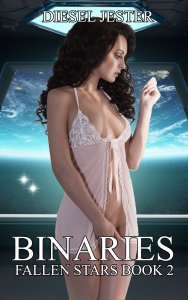 Meek and conservative housewife Sophie has been left in the New Roman Republic after being used as a commodity chip in a game of card. Now enslaved, she yearns for the safe and comfortable life that she once had and wonders why her husband gave her up so easily to a slaver. It’s a culture shock for her as she struggles to adjust to her new hedonistic life as a pleasure slave. Her only solace now is in fellow slave; a purple skinned selvian known as Ayen.

Ayen is caring, soft spoken, and gentle with Sophie as he takes her under his wing to show her how to survive. He finds himself falling in love with the frightened human woman who has turned to him for comfort and vows to avenge those who have wronged her. Can justice wait long enough for him to get free? Once he is free, can he convince others of his cause?

What’s more, is he willing to enlist the aid of his people’s worst nightmare to see it done?

Is there a life of love for Ayen and Sophie? Or will they be regulated to play the parts given to them. Find out in the second installment of this new sci-fi erotica series. 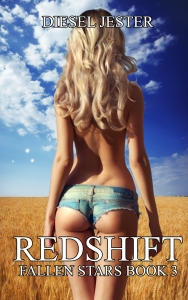 Roxanne is a woman on the run.

While hiding on the Republic farming planet of Argos, Roxanne is discovered by a Confederacy Bounty Hunter who’s been tasked with taking her back. She runs further into the Republic, preferring to face slavery there than her sham of a marriage back home to an abusive man with very lofty political ambitions.

Her only hope lays with her lover, Isaiah, with whom she’d left clues with to not only find her but to unravel the mystery she leaves in her wake. Its a race against time as she tries to remain safe in the Republic and out of the reach of the Confederacy. Even serving as a slave in the New Roman Republic she enjoys more freedom. Staying in the Republic, she can be herself.

Going back to the Confederacy means a fate worst than death.

Follow Roxanne and Isaiah’s adventures in this third installment of the new Fallen Stars series by Diesel Jester. 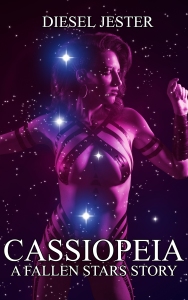 Cassileil of House Trasys has come of age and, by Selvian custom, must enter her mandatory Term of Service as a slave.

Having high aspirations, she eyes the Emperor’s Harem or being a pleasure slave to another noble house. Her hopes are dashed when she’s shipped off instead to the Human planet of Freeport as a gesture of goodwill between the Empire and the New Roman Republic.

As she’s sold off and made to sleep with everyone from Humans, to Selvians, to Orcs, she starts to find herself in her own journey of sexual awakening. Find out how her journey goes in this short story installment of the Fallen Stars series. 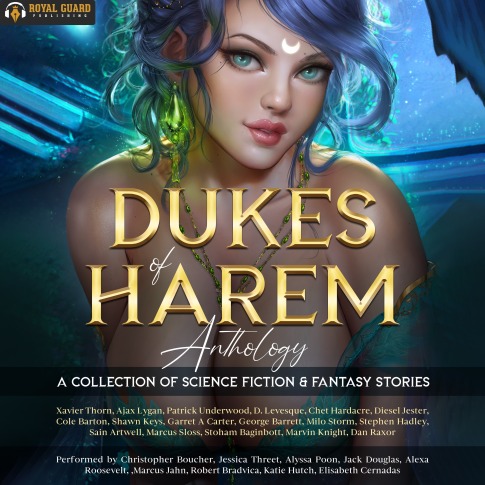 This anthology contains action, adventure, spicy tales, and some swishing tails. A rare treat of compiled stories in one place. Enjoy!

Starfinder Alexander Moreau finds himself the sudden, unwilling owner of four beautiful goblin women that are handed off to him.  Not knowing what else to do, he winds up taking them aboard his ship and finds out that he’s got more than he didn’t bargain for!